Turn sounds of your city into music!

Your city is full of interesting sounds. Learn how to create a musical composition from the city soundscape that surrounds you!

Using the built-in samplers and FX in Ableton Live, this unique workshop led by Berklee faculty, Yoel Genin (a.k.a Shwesmo), will cover the production and sound design techniques that help you tweak and change recorded samples for use in a musical setting. Also discover composition and arrangement tools and tips, as we analyze fully produced Ableton musical projects of Shwesmo’s ‘Sample the World’  series.

This workshop forms part of the Sounds of the City project, produced by MAP in collaboration with Berklee College of Music. Earlier in September, we’d put out an open call for music producers. Our four finalists, hailing from four cities of India (Bengaluru, New Delhi, Mumbai & Kolkata), will also begin their journey to creating magical city tracks with this workshop!

Born and raised in Israel, Yoel started his musical endeavors at a young age, learning piano, drums and trumpet, before ultimately settling on the guitar. As a young musician, he appeared on the big stages of his home country in various festivals and also performed across Europe. He recorded electric guitar for multiple albums of local Prog/Rock bands including ‘Soul Enema’, and ‘Between Falls’. Yoel’s hunger to expand his knowledge led him to study at Rimon School of Music in Israel, and later at the famous Berklee College of Music, where he won the “Tad Dameron” and “Alex Ulanowski” awards in composition, while working towards completing the challenging and prestigious Bachelor Degree in Jazz Composition, which he graduated Magna cum Laude.

By that time, he was already leading his very own Prog-Fusion Quintet and released the debut album – HAGO, which cultivated tremendous reviews around the world as it was considered musically ground-breaking.

Since then, Yoel has performed with, and arranged for world-class artists like Tigran Hamasyan, Antonio Serrano, Idan Raichel and Carmen Lundy. As part of the Berklee Indian ensemble, he arranged and performed with some of the biggest Indian artists such as Raghu Dixit, Vijay Parkash and Shankar Mahadevan, in the US and India. He also joined the Prog-Metal band Distorted Harmony, and was endorsed by the unique OD guitars.

Yoel’s exploration of breaking musical borders then led him into the world of electronic music; and to the creation of Shwesmo – An ‘alter ego’, setting all of his vast musical knowledge and style against a modern electronic sound, to create something unique within the electronic music genre. Yoel also recently went back to Berklee College of Music, this time working as a professor, co-directing the Contemporary Indian Ensemble class and teaching other various classes in the college. 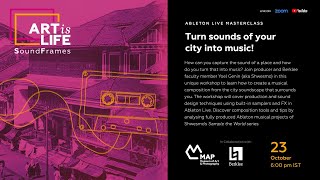 Learn how to create a musical composition from the city...

You are signing in for 90 days free trial membership
Continue with Facebook
Continue with Google
Or use your email to sign up
We use cookies on our website to give you the most relevant experience by remembering your preferences and repeat visits. By clicking “Accept”, you consent to the use of ALL the cookies.
ACCEPT REJECT
Manage consent